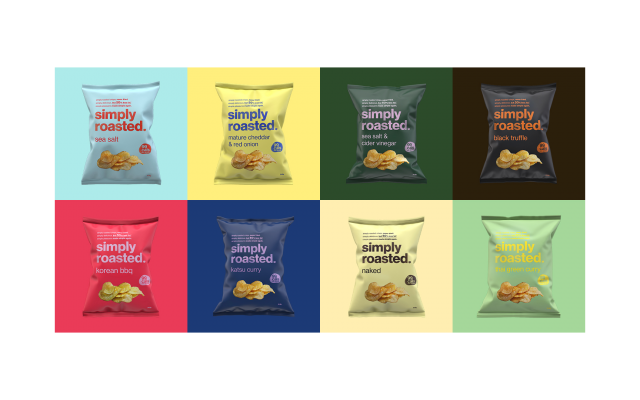 This Spring, Pilot Lite and its Mindful Snacker Company announced the launch of a game-changing snack product: Simply Roasted, a premium potato crisp that offers the great taste of a traditional fried crisp – but with only half the fat and significantly less salt.

A leading multinational CPG invested over $20m and more than 10 years of R&D to develop a breakthrough cooking process for crisps that resulted in a healthier nutritional profile producing crisps with 50% less fat and significantly less salt than traditional fried crisps. However, the company estimated it would take another $25m to scale the techhology. Deploying this new roasting process would also affect their current processing lines. So, despite being a truly transformative way to produce a great-tasting, better-for-you crisp, they put the technology on pause.

In 2019, Pilot Lite was able to acquire the innovative crisp roasting technology, making it a foundation of the Mindful Snacker company. In little over a year, we were able to validate and scale the manufcaturing process, spending about a fifth of that original estimated budget. Our crisp production facility is now operating near Norwich, England.

The Simply Roasted process begins with fresh, whole potatoes that are specifically graded, inspected and sliced for roasting. The slices are then transferred through the preparation and cooking stages, emerging as skin-on potato crisps with a hard, crunchy bite. In addition to delivering a great-tasting, better-for-you crisp, the Simply Roasted cooking method uses about 25% less energy than traditional crisp production. We fully expect Simply Roasted crisps to be category-disrupting and here's why: they takes like a permium, peel-on potato crisp but they have 50 percent less fat and significantly less sat than traditional fried crisps.

Simply Roasted is launching in 4 core flavors (Sea Salt, Mature Cheddar & Red Onion, Sea Salt & Cider Vinegar and Black Truffle) and will offer an extended range of flavors for adventurous snackers including Korean BBQ and Katsu Curry. Customers can purchase ‘Impulse’ Bags (with just 99 calories) and ‘Sharing’ Bags at a variety of UK retailers or direct from the Simply Roasted online store.

Mindful Snacker plans to introduce other innovative Simply Roasted flavors later in the year as well as additional healthy snack products across a range of categories, including plant-based sauces and dips.

Today marks the official launch of our Mindful Snacker website. Having announced the company earlier this year, the site gives a flavour of what's to come including Simply Roasted crisps - the best thing since sliced potatoes!